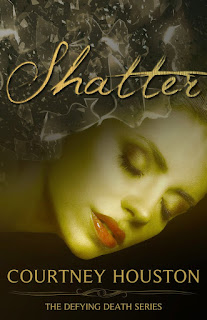 BLURB:
I am going to do something that has never been done before.
My name is Telor Conway, and I am going to destroy Death. Bring her to her knees in front of me.
I don’t know how and I don’t know when.
The only thing I know for certain, is that nothing will come between me and my soul mate ever again.
I’ve been given a second chance at life, a life with Catalina. I’ve been given something worth fighting for.
will fight for it, for her… for us. Even if it is the last thing I do.
I have thrown the gauntlet.
On your marks.
Get set.
Go.
~~~~~~~~~~~~~
a Rafflecopter giveaway

Time had grated on me. Not because I hadn't enjoyed it, I had enjoyed every second of it, but because I couldn't help the nagging feeling in the back of my mind warning me to not become complacent. The other shoe would drop and it had.


Destiny and Life have basically disappeared; I had their numbers but had been trying to convince myself I didn't need their help. I couldn't gamble like that, not with Catalina's life. Not with our future. If it took swallowing my pride, I would do it in a heartbeat. Oliver’s visit only solidified my decision further. I pulled my phone from my pocket and let my finger hover over Denny's name for a moment before I sighed and dialed it.


It rang four times before it went to a generic voice mailbox that read his number back to me with instructions to leave a message. After the beep, I stayed silent for far too long, not sure exactly where to start. The only comfort I had was that Denny understood me like few in this world and the Other did.


"This was too easy," I confessed out loud for the first time. Saying it made me feel like a failure. A failure that would get more than just myself killed. "I know Tori, better than I care to admit to. I knew she wouldn’t bow out gracefully. We need to talk. In person."


I hung up, letting my confession speak for a plea in and of itself. Denny and Robin both risked a lot to keep us alive and together, I would have liked to think they would have a vested interest in us staying that way. I had made the call, now all I could do was wait for my plea to be heard and headed.


AUTHOR Bio and Links:
Courtney lives in Kentucky with her husband (Mr. Houston), her two boys (Emmett and Ellis), her two cats (Polly and Jed) and her 3 chickens. Legal Assistant by day and writer by night, Courtney enjoys pancakes, coffee, wine and the number 26. She's a Leo, at least that's what the tattoo on her back says.
www.facebook.com/authorcourtneyhouston
Twitter @courtneyhouson