Find Your Next Great Read Here


Welcome to Saturday Snippets where I present to you some fun and interesting reads from a variety of genre's. I'm also giving 1 lucky blog commentator a chance to win a $5 Amazon Gift Card. Check these stories out... 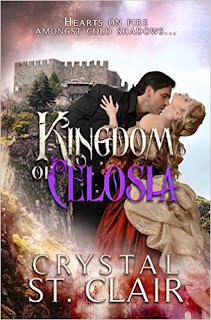 Kingdom of Celosia: Hearts On Fire Amongst Cold Shadows by Crystal St. Clair


Princess Faith faces a life of duty to the Kingdom of Celosia, but she dreams of freedom.

She is daily reminded of the burden she will one day carry as she is educated to become a Queen...
The greatest of these reminders is a pendant given to her by her mother which is imbued with magical properties. Matters of the heart also hinder Faith from accepting her role. She is engaged to Prince Merek, but has no feelings for him. She secretly longs for true love, despite the fact that her rank keeps her from loving the man she desires most, the stable-hand Justus. Feeling trapped by the arrangement, there is little she wouldn't consider doing to stop the wedding, but it seems her fate is sealed.

On the borders of their land is the Dark Forest, a home for many creatures with elemental powers of untold might. In that realm, the Troll King plots to kill her father and the wolves in his court are on the hunt for her, believing she is easy prey. But Faith is much stronger than they suspect, and against all odds, she sets out to protect those she loves.

Armed with her bow, riding on the back of her trusted mount, Ruby, she must confront the forces of evil that threaten to take everything from her and conquer them in the name of Celosia.
BUY LINK 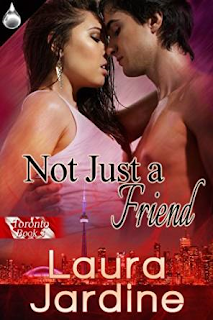 Not Just a Friend by Laura Jardine


“If he asked for my number, there must be something wrong with him.” Maya stuffed a bite of waffle into her mouth and waited for her friends to contradict her.

“Don’t say that!” Kristy’s fork clattered to her plate. “There is nothing wrong with you.”


“But past experience has taught me that any guy who’s interested in me is somehow defective.” Take her ex-fiancé, for example. Justin was a police officer, but it later turned out he was also a drug dealer. And he cheated on her. Yeah, Maya sure knew how to pick them. Her previous boyfriend was fired for stealing from his employer.

Allison asked for a coffee refill then said, “You’ve just had some bad luck. Don’t let it stop you.”

Maya sighed. “I don’t know.”
“Come on.” Kristy reached across the table and placed her hand on top of Maya’s. “You’ve hardly dated in the past four years.”

And everyone she’d met for a first date was someone Kristy had set her up with. Les and John and Anton. Although they were all nice enough, Maya hadn’t been on a second date because none of them had interested her. Not only was she unable to attract men who weren’t losers, but she'd never liked the nice guys anyway. She sure was great at this dating business. At least today she had lots of strong coffee and a big plate of banana waffles with whipped cream to comfort her. Plus a couple of friends she’d known since university. Brunch at the cheap diner near campus was something they still did occasionally. Life wasn’t all bad.
“I’m telling you,” she said, “there’s got to be something wrong with Tyler or he wouldn’t have asked for my number.”

“But you’re going out with him,” Kristy insisted. “When he calls—”
"Hell, maybe he won’t even call. That wouldn’t surprise me.”

“I bet he’ll call,” Allison said.
Maya snorted. “What makes you so sure? You don’t need to say stuff like that to make me feel better.” She drowned her last waffle in maple syrup. “Either Tyler won’t call, or he’ll call and prove himself an asshole. Hopefully sooner rather than later. But fine. If he calls, I’ll go out with him just so I can say I did.”

Maya wasn’t quite as hopeless as she acted. The Justin debacle was a long time ago now, and she had a kernel of hope that maybe, just maybe, it would all work out for her. Kristy and Allison were in happy relationships, as were three of her younger siblings. And a guy had asked for her number the other day. There was hope. Maybe just a little, but there was some, wasn’t there? But she didn’t say that out loud, even to her closest friends. That wasn’t who Maya Gregory was to the world. Not anymore.
BUY LINK 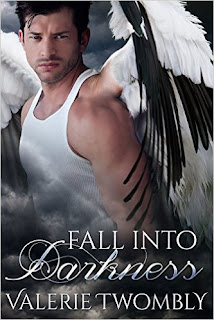 Fall Into Darkness by Valerie Twombly

Ashley wandered through Eli’s bedroom, noting how bare it was. Except for a queen four-poster bed, a dresser, and a fireplace, there was nothing else here. She wondered how lonely he must have been to never make a real home in one place. Eva had told her this small cabin in the north woods was always his favorite and that was why she’d asked to be brought here.

After stoking a fire, she donned the short red nightie that hardly covered her breasts and left her long legs exposed. There was no way he could resist, not if he were half as needful as she, and something told her he would be more so. She hoped he’d be so lust ridden he’d complete the bond. Guilt filled her for what she was about to do, but she’d do anything to save him. She’d worry about the aftermath later. The double-winged tattoo on the back of her hip burned, and she’d learned it meant Eli was close by. Was he watching from a distance? She stepped into the soft light of the fire, knowing it cast a sensual glow across her skin. Yeah, she was pulling out all the stops. A cool breeze whispered across her skin causing her nipples to tighten.


She turned, and when her gaze fell upon him standing in the shadows she gasped. His naked chest glistened in the firelight that reflected across the room. A thick rope of muscles coiled just under his skin, and her fingertips itched to touch him. Dark jeans, settled so low on his hips, she could see the dusting of hair that led to his sweet spot. However, it was the massive black wings that stretched out and brushed the ground that really drew her attention. Her fallen angel was dark and sinister, yet every fiber of her being said he’d never harm her. He’d come to her and she was determined to finish what they’d started.
She was determined to save his soul. “Eli.” She took a step closer.

He flashed a set of fangs. “I’ve never been weak in my entire life, but with you… You are my weakness. Look at me Ashley, I’m one step away from claiming you. Being mated to me will be a fate worse than death.”
Another step. Careful not to scare him off, she stopped short of being able to reach out and touch him. Opening her mind, he could feel everything she did should he choose to.

“You’re wrong. Walking away from you would be a worse fate. You’ve touched something deep inside me. Fate brought us together because we need each other.” She took the last step and placed her hands on his chest.
He stiffened beneath her touch. “I need you and I don’t mean just the physical. I mean emotionally as well. You have my heart as well as my body. All of me, it belongs to you.”
BUY LINK 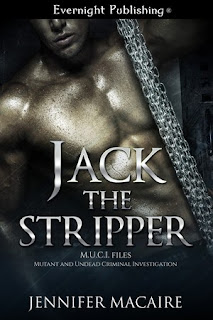 Jack the Stripper by Jennifer Macaire


Taking a deep breath, she turned the page to the last photograph. In that last picture she posed proudly on the front steps. She was wearing her police uniform. It was her first morning on the job, and the last photo her grandmother ever took. A small sigh escaped her and she touched the picture lightly, remembering the crisp feel of the uniform and the almost bursting-with-happiness feeling she’d had. A week later someone had pushed her grandmother down and stolen her purse. When she fell, she’d broken her hip and died not long after from what the doctors called “complications.”

Brianna knew all about complications. Her whole life was one complication after another and it didn’t seem like things were going to change.


When Jack got back it was late. Brianna had sandwiches on the coffee table. She’d left the albums out, and Jack took a sandwich and poured over the photos, making her tell everyone’s stories.
But there was one more album. A folder, more like it, with just some newspaper clippings in it. Brianna had hesitated for a long time before getting this one out. Finally, when Jack had exhausted all the stories about her grandmother and her camera, she slid the folder from beneath the bottom album and pushed it across the coffee table toward him.

He took it and opened it on his lap. Then he looked up at her, his expression unreadable.
Brianna crumpled her napkin in her hands. “I know you say you have some holes in your memory. I thought perhaps this would help.”

He fingered the clippings, then nodded, and held them up to study. “My parents didn’t come to my funeral because they’re dead. But I recognize my aunts and uncles, my grandparents even. That’s my cousin Joey and his twin, Melanie.” He closed his eyes. “It’s like standing in the surf. The waves come at me, and I can’t stop them.”
“I’m sorry.”

“No, it’s all right.” He ran his finger over the newspaper.
“Do you want to call anyone? Your cousins?”

He gave a laugh, but it sounded more like a sob. “No. They were at my funeral. They won’t believe me, or they’ll be horrified … like you were.”
Brianna was going to tell him she hadn’t been horror-struck, but she couldn’t. She’d been so frightened she’d peed her pants. She’d never been as shocked as that moment, when Jack had said his name and turned around. If she’d had a weak heart, she’d be dead right now. As it was, she had somehow accepted that Jack was back, but he wasn’t the same Jack she’d known.

She didn’t feel the same way about him. There was a difference. She’d only known him for about a month. What would it be like for his family, who had known and loved him all his life?
“They deserve to know though,” she said.

“I’ll be a monster to them,” said Jack. He smoothed the newspaper clipping over his knee and a faint smile tugged his lips. “There was a nice crowd there that day. And there you are, right next to Joey.”
BUY LINK


For more chances to win subscribe to my blog and don't forget to tune in to next Saturday's Snippets.