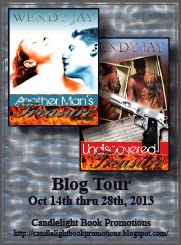 
I live in Northern NH, in my hometown. I have enjoyed reading and writing since I was a young child and wrote poetry since I can remember. Through my school years, I took every opportunity to take a literature or creative writing class.  I worked in finance for 28+ years until Feb. 2012 when the company downsized and I lost my job.  The opportunity to pursue a lifelong dream of writing a novel came about when a Facebook friend encouraged me to try after reading a couple blurbs I spit out upon being asked some advice!  I took my vivid imagination, my gift of words which I attribute to God, and wrote my first novel Another Man's Treasure. Admittedly, I fell in love with my own characters and continued their story with my second novel Undiscovered Treasure.

I write romance/erotica and at some point in the future want to try my hand at paranormal and adventure/action.  My biggest inspiration is my sister Jennifer.  She has stood behind me all the way and given me so much emotional support.  Along with her, I have some amazing friends who I refer to as "my cheerleaders".  They keep me motivated along my writing adventure.  When I am not writing, I have to admit I am an electronic junkie.  If it has a push button, I either have it or want it! 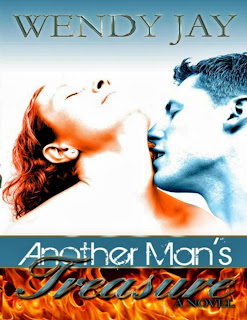 Blurb: Jude Delaney…A dark haired Adonis with a slightly kinky side. He fell in love with a red haired beauty in high school, only to have her torn from him and sent away. Miranda, his first love…his only love.
Ross Guthrie…A tall, sexy man who carries a gun. Jude’s best friend from college. More brother than friend. Ross now works for the FBI and his assignment sends him to Jude’s hometown…to protect Miranda.
Miranda Jones…A sassy red-head. She takes charge of her life and runs from her abusive ex-boyfriend, Hank Castile. Leaving California behind, Miranda moves back home…and right into Jude’s loving arms.
Two best friends…Both determined to protect this woman at all costs. Will Jude and Ross have what it takes to save Miranda from Hank Castile…the man who abused her and now wants her dead?
Buy links:
Kindle : http://www.amazon.com/dp/B00DBGE8AI
NOOK: http://www.barnesandnoble.com/w/another-mans-treasure-wendy-jay/1115864472?ean=2940044604810
Paperback: http://www.lulu.com/shop/wendy-jay/another-mans-treasure/paperback/product-21064424.html
Smashwords: https://www.smashwords.com/books/view/326375 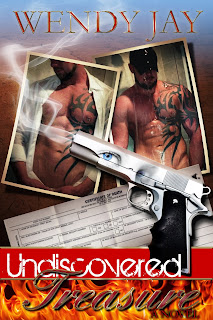 Blurb: Undiscovered Treasure is book 2...the sequel to Another Man's Treasure. Jude fights against the odds to protect his one and only love, Miranda. His best friend Ross is there to help and finds his heart in a turmoil over the beautiful Francine. Journey with them through the good and bad times. Is luck on their side for happiness?
*This book is a continuing story and not a stand alone. Adult themes and language.
From the corner of his eye Hank noticed something odd with his office door.   The padlock was there, but the lock wasn’t engaged.  Hank touched the lock and it fell open.  Fuck, I didn’t lock it this morning?   He walked into his office and flipped on the light.  At first glance, everything looked in place.  He walked over to his desk and there was a note.
Hank...By the time you read this I will be long gone and you will be nothing more than a bad memory.  You have given me your last order and hit me for the last time.  You are an abusive son of a bitch and I am glad to be rid      of you.  PS…Before I left LA, I dropped a bunch of paperwork at the police station…good luck with that, you fuckin’ prick!
“You little bitch!  I will kill you when I get my hands on you!”  Hank shouted at the top of his lungs.  A single thought streaked through his mind like a bolt of lightning.   THE TAPES?  He opened the desk drawer and the key was gone.  Hank turned slowly towards the wall with all the file cabinets…one lock popped with the key still in it.  Hank walked over to it and pulled the drawer open…empty!  The tapes were gone.  Hank dialed Miranda’s cell phone number.
“You’ll never get free from me, Miranda. You’ll never be able to shake me.”
Buy links:
Kindle http://www.amazon.com/Undiscovered-Treasure-Book-2-ebook/dp/B00EW38U76
NOOK:  http://www.barnesandnoble.com/w/undiscovered-treasure-wendy-jay/1116890467?ean=2940045256407
Paperback:  http://www.lulu.com/shop/wendy-jay/undiscovered-treasure/paperback/product-21185620.html
On Smashwords:  https://www.smashwords.com/books/view/352998
TOUR SCHEDULE:
﻿
Posted by A. M. Griffin at 12:00 AM