I was invited by Cynthia Sax to participate in the Tasty Summer Reads Blog Hop! 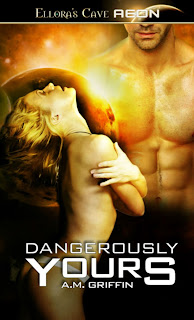 The steamy standalone sequel to Dangerously Mine.

Kane Epps divides his life into two distinct parts—before the alien invasion and after. Before the invasion, he had a pregnant wife and a high-powered job. After the invasion, he’s left with only himself and his hatred for all things alien. He channels his bitterness by captaining a vessel of renegade humans—space pirates who don’t think twice about taking what they need.

Princess Sa’Mya is on the run. She and a few trusted advisers fled her home planet, only to be captured by the sexy, dangerous Captain Epps. He claims to hate aliens but can’t seem to resist touching her or kissing her…everywhere. As Kane introduces Sa’Mya to ever-increasing, unimaginable realms of pleasure, the princess becomes determined to earn his trust. She’s used to getting what she wants. And this time, what she wants is Kane Epps.

His cock throbbed in response to her touch. Groaning, he grabbed her hand and led it to his shaft. Anna moaned deep in her throat. He wrapped her delicate palm around it, encouraging her to stroke it.

His cock jerked in her grasp. She stopped.


Anna’s hand encased him again, stroking faster. His pre-cum began to coat his slit. She stopped to run her finger across it and scoop it up. The licking coming from her lips made him want to explode on the spot.


Music played again. She fisted him, stroking up and down. She stopped only to taste the fruits of her labor. Damn, if he let her continue he would end up spilling his seed on the sheets.


Kane rolled to his stomach and pinned her beneath him. He nestled between her legs, where his bare chest rubbed against silk. He began to trail kisses along her slender neck to her breasts.


He reached under to palm her plump, round ass. Digging his fingers in her soft flesh, he squeezed, pressing his cock on her slick valley. Her sticky wetness coated him as he rubbed his hard length across her folds. The sensitive ridge of his cock brushed her opening with each passing.


Her hips rotated and moved in time with him. One hand cradled his head while the other grabbed his ass. He planted light kisses around the swell of her breast. Her breasts were larger than normal, voluptuous even. Pregnancy was treating her body good, plumping her up in all the right places. She held onto the back of his head and fed him her erect nipple.


Anna had never been the aggressor in bed. “I like this side of you,” he groaned.


Obliging, he latched onto the nipple that brushed his lips. She squirmed and moaned under him. Within moments her legs were wrapped around his waist. His lips tweaked and tugged the bud, teasing it.


He flicked his tongue over her erect tip before blowing cool air over it. She raked her fingernails through his hair, urging him on. He took care to suck, squeeze and nibble until she bucked beneath him.


She arched her hips, grinding on his hard shaft. Her slick juice was proof she was ready to receive all nine inches of him. He couldn’t resist the heat radiating from her valley any longer. He planned to bury his dick balls-deep in her tight sheath and make her scream out tonight. The neighbors could give them funny looks in the morning, he didn’t care.


He trailed a hand over her flat abdomen.


Shaking off the fleeting alarm, he continued to her folds—hairless folds.


Since when did Anna get Brazilian waxes?


Kane shrugged it off and let his fingers slip farther to part her plump lips.
What the fuck? Where did her clit go?

When writing are you a snacker? If so, sweet or salty?
Not so much. To snack would mean that I'd have to move my computer away. So luckily I don't fall into that category.
Are you an outliner or someone who flies by the seat of their pants? Are they real pants or jammies? LOL. They're jammies. I'm a pantser, but sometimes I veer too far off course and I have to get control of my characters. That's when I have to sit down and figure out where they are in their lives and where they need to be. It works so well that when I'm done I always wonder why I didn't write an outline from the beginning.
When cooking or baking, do you follow the recipe exactly or wing it?
Mostly wing it. An extra dash here and sprinkle there. If the recipe calls anything chocolate then I veer WAY off course.
What is next for you after this book?
Dangerously Hers, the third book in this series will be out sometime at the end of summer and I'm currently working on two more books in this series. I'm excited to tell everyone's story. I've even been toying with the idea of writing a series of the people that are still back on Earth. That remains to be seen...
Last Question...on a level of one being slightly naughty to ten being whoo whoo steamy, where does your book land?
Well, it is an erotica with hot space pirates and an alien princess...

Looking for the perfect dangerously good sweet to eat while reading Dangerously Yours?


1 cup coarsely chopped nuts (can be deleted if needed) 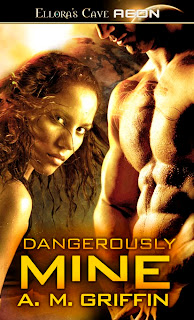 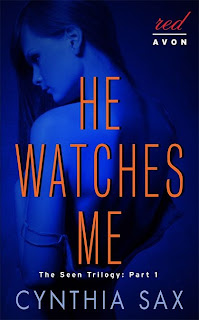