Voyeurism And He Watches Me
Cynthia Sax


Voyeurism is one of the most common and natural kinks. It is in our nature to want to know what other people are doing in private. We’re searching for reassurance that we’re normal. So we watch movies and TV shows. We read books. We listen to our coworker as she describes her hot holiday party encounter with the firm’s CEO. We search the internet. We often learn new things. Voyeurism can take the monotony out of monogamy.


Blaine, the billionaire hero of He Watches Me, takes his voyeurism one step farther. He has been watching Anna, the heroine, skinny dip in his pool via his security cameras. Once he returns home, he plans to continue watching her… from his poolside seat. He doesn’t touch her. It is enough for this sexy man to watch her, to focus on her, to orchestrate their encounters.


Blaine has other reasons for not touching Anna. He wants to earn her trust and to savor each stage of their relationship. But he also truly enjoys watching. He kisses with his eyes open. He installs cameras in his backyard. He has mirrors in his bedroom. Blaine achieves greatest sexual satisfaction when he watches.


Blaine’s voyeurism benefits Anna. While watching her, he learns exactly how to please her. When Blaine DOES touch Anna (in He Touches Me), there’s no guessing about what she likes. She has shown him and he has certainly paid close attention.


What is the craziest voyeuristic thing you’ve heard about or done? Has being a voyeur (and we’ll ALL voyeurs in some way) helped your relationship? 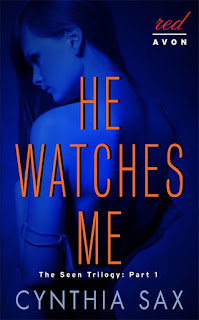 
She desires to be seen. He wants to watch.


Anna Sampson has a naughty secret. Every night, she slips into her neighbor’s yard and swims naked in his pool. She fantasizes that the dynamic young billionaire watches her nightly nude aquatics, his brilliant green eyes gleaming with lust.


She discovers this isn’t pure fantasy. Gabriel Blaine has been watching her via his security cameras, and now that he has returned to L.A., he doesn’t plan to stop. That’s all he wants—to watch. Anna knows she shouldn’t allow him and she certainly shouldn’t want more, but she craves Blaine’s attention, needing his gaze fixed on her body.


Part One of The Seen Trilogy

Email ThisBlogThis!Share to TwitterShare to FacebookShare to Pinterest
Labels: Avon Books, Cynthia Sax, He Watches Me