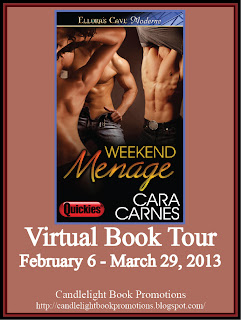 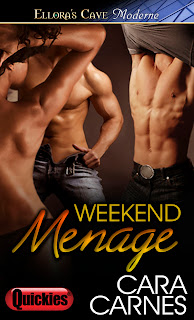 Blurb:
One night of controlled passion is all she allows.
Rebecca Ann Majors fled the temptation of a ménage once, but now the two sexy men starring in her wildest fantasy are back and demanding her complete surrender for the weekend. Emboldened by lust, she succumbs to her desire and learns ecstasy has a price.
They demand everything she has and more.

Joe Davenport and Dillan Morrisey were used to handling any situation—including the sexy siren who’d sashayed out of their lives two years ago. This time she’ll quench their lust even if it means they have to share her.

When Sunday morning dawns the three must decide if one weekend was enough to sate the passion they shared.

Enjoy the author's interview of her character Rebecca!


Cara: Thanks for sitting down with me and talking about the book and, more importantly, the guys.


Rebecca: *shifts in her chair and tugs on her blouse*. Thanks for writing it for us. You certainly went into a lot more intimate detail than I expected. I don’t remember telling you half of that stuff. It’s rather mortifying to know your readers will know what we… *she clears her throat* I can see I have to discuss boundaries with a couple of men in my life.


Cara: What can I say? The guys had a lot of input in that regard.


Rebecca: Clearly. Neither of them have a filter in their heads apparently. Just because we engage in public relations doesn’t mean we have to be so brazen about sharing it with everyone.


Cara: Can you tell us a little bit about the relationship between you and your brother? I know when I first heard of how you met Dillan and Joe it surprised me most to see that you’d agree to take your brother’s friends in like that.


Rebecca: Family does what must be done for family. Andy would do whatever I needed without question. I’m not about to shirk my sisterly duties. *Rebecca shrugs* What can I say? My brother is a geek deep down. Most of his friends are harmless gamers.


Cara: But not Dillan and Joe. What does he think about the relationship you have with the two of them?


Rebecca: They aren’t into the same games as Andy’s other friends. *shakes her head and a tinge of pink appears in her cheeks* Andy was pretty surprised when they told him. But he loves me and he likes them.


Cara:  You were pretty dead set against relationships before Dillan and Joe came along. What did they do that changed your mind?


Rebecca: *sighs* They made me feel beautiful. Treasured. When I’m around them, I never have any hesitation in sharing what I want or feel. My desires matter. I matter.


Cara:  It sounds as though we all need a Joe and Dillan in our lives.


Rebecca: Sorry, I don’t share. It’s been hard enough getting quiet time with them. They’re still working at whatever the hell they do that’s top secret. They’re resettling here in but it’s going to take some time to get them situated into less risky and secretive work. I have to admit I’ll sleep a lot better when they’re here every night where they belong.


Cara: How do the sleeping arrangements work anyway? I’m sure some readers are curious.


Rebecca: I have a big bed. They guys aren’t shy. They’ve been through a lot together so sharing a bed with me isn’t a problem for them. Thank God. I’d hate to have to choose between them each night.


Cara: So I heard you have a nickname from your childhood years they guys use with you sometimes?

Rebecca: *closes her eyes and takes a deep breath* If you had a brother named Andy and your middle name is Ann, you wouldn’t appreciate it very much either. Now, if you’ll excuse me, I have some men to talk to about over sharing. Excerpt:

She flopped out of bed in a display of anger no one could see. Assuming they were still stuck on the mile-long stretch of hotels by the airport she’d have a good forty minutes to find pillows, blankets and sheets. The sofa supposedly made into a bed, but she doubted it was designed for normal humans to find comfortable.
Not. Her. Problem.
“I hope they don’t mind sharing a queen-sized foldout.”
Her brother chuckled. “They’ve shared smaller.”
Great. Now she’d have images of the two geeks mugging down because they were probably gay. “They here for the parade then?”
“What?” Her brother paused for a moment and then busted out with a fit of laughter. “They aren’t gay, sis.”
“Yeah. Sure.”
“You’ll see soon enough. But listen, seriously, I owe you big time for this.”
There he went getting all serious and shit just when she’d spiked her pissed meter to a good level. She padded into the living room and trudged to the small hallway closet.
“Just let me know if they give you a hard time and I’ll kick their asses. Somehow.”
“I think I can handle a couple of geeks.” He chuckled and a sense of unease settled into the back of her brain, waiting for the sleepy haze to clear. Something about that sound made her question her assumptions. Then his last word thundered through her. Somehow.
“Wait. Who’s coming over here, Andy? I know most of your friends. There aren’t that many you couldn’t knock six ways to Sunday.”
Two specific names rammed her defenses and shattered her into a puddle of wanton hope. Dear God, if they showed up here she’d jump them. Heaven help them both because she’d walked away from them once a couple of years ago.
A one-night stand with her brother’s friends wasn’t a good idea, and she never allowed a man more time with her than that. She’d learned her lesson a couple of times over. Give a man your heart and he’ll fillet it while you watch. Then leave you a dry husk of what you were.
Not that she was bitter. Or jaded.
Okay, she was both but she had good reason to be cautious and those two men had been way too tempting and determined.
They’d been drunk. The offer had become her most frequented sex dream. The what if I’d become the innocent in their sin sandwich?
She jumped when the doorbell sounded.
“That’s probably Joe and Dillan.”
Oh freaking mother of all that was screwed up. It was them.

Bio:
Born in small-town Texas, Cara Carnes was a princess, a pirate, fashion model, actress, rock star and Jon Bon Jovi’s wife all before the age of 13.

In reality, her fascination for enthralling worlds took seed somewhere amidst a somewhat dull day job and a wonderful life filled with family and friends. When she’s not cemented to her chair, Cara loves travelling, photography and reading.

More information about Cara can be found at www.caracarnes.com or on
Facebook: http://www.facebook.com/authorcaracarnes
Twitter: https://twitter.com/caracarnes
Tour long Giveaway: $50 GC to Amazon, B&N or ARe
Dates: 2/6/2013 thru 3/28/2013
a Rafflecopter giveaway
Posted by A. M. Griffin at 12:00 AM