Please welcome an EC author from across the pond!

A Taste of London By: Lucy Felthouse 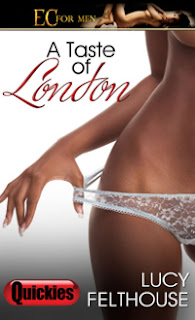 
I brainstormed for a while before coming up with something. But what I did come up with gave me the basis for an entire series, not just one book, so I was rather pleased. When I was writing book one, A Taste of London, I had to keep in mind what men would act like and say, as well as what kind of sexual fantasies go through their minds. It wasn't easy, but it was a great deal of fun. When my character got laid for the third time in a day I asked myself if it was realistic—then I remembered something. A) it's fiction and B) it's aimed at men and their fantasies, and many men would like to have sex thirty times a day, never mind three C) it's not completely impossible for someone to have sex with three different people in a day. Especially if they look like my lead character, Ryan. He's hot.


So it stayed as it was, and I sent Ryan Stonebridge on a whirlwind sexual adventure on London, before plonking him on a Eurostar to Paris. Which is where his kinky adventures will continue. I'm writing the second book as we speak, so watch this space...


Ryan Stonebridge and his friend Kristian Hurst are heading off on the trip of a lifetime. They’re spending their gap year traveling the world and expect lots of sun, sights and sex. The guys have a couple of days in the English capital before catching the Eurostar to Paris. Unfortunately, a family emergency means that Kristian has to head back home for a while, leaving Ryan to continue the trip alone.


Luckily for Ryan, he’s an attractive guy and there is no shortage of gorgeous women available to help take his mind off Kristian’s family drama.


*****
Lucy is a graduate of the University of Derby, where she studied Creative Writing. During her first year, she was dared to write an erotic story - so she did. It went down a storm and she's never looked back. Lucy has had stories published by Cleis Press, Constable and Robinson, Decadent Publishing, Ellora's Cave, Evernight Publishing, House of Erotica, Ravenous Romance, Resplendence Publishing, Secret Cravings Publishing, Sweetmeats Press and Xcite Books. She is also the editor of Uniform Behaviour, Seducing the Myth, Smut by the Sea and Smut in the City. Find out more at http://www.lucyfelthouse.co.uk. Join her on Facebook and Twitter, and subscribe to her newsletter at: http://eepurl.com/gMQb9
Posted by A. M. Griffin at 12:00 AM