Please join me in welcoming a sci-fi buddy, the lovely Mrs. Cara Bristol. My question to her was: What inspired you to write Mated With The Cyborg and the Cy-Ops Sci-Fi series?

I love cyborgs. They’re human beings who look fully human, but have been augmented by computer and/or mechanical parts. To me, they represent the ultimate alpha hero: strong, dominant. They’re tough as nails until they meet the heroine, whereupon they fall hard. In most sci-fi romances, cyborgs are created by an evil government who forces them to fight their wars. I wanted to offer something different.
My cyborgs are spies. Think of them as a cross between James Bond and the Terminator (the good one from Terminator 2, not the bad one from the first movie). They’re cyber operatives in a covert paramilitary force who are fighting against terrorism in the galaxy. The terrorism part was inspired by present day threats (although I finished writing the book before the attacks in France).
In Mated with the Cyborg, the hero does undercover on an enemy space station, where he meets the villain’s innocent daughter. When he learns her father wants her dead, he’s forced to choose between his mission and saving her life.
I’d written one other sci-fi series, Breeder, but in this Cy-Ops, I wanted to challenge myself by writing a romance that is also a bit of a space opera with space craft, space stations, alien planets, futuristic weapons, and lots of explosions. Lol. Besides cyborgs, readers will meet androids and aliens of all persuasions. ( I still want to emphasize that this is romance).
One of the coolest venues is the Darius 4 Pleasure resort, which is staffed by android pleasure workers. I mention it in book 1,Stranded with the Cyborg, but it serves as one of the key settings in Mated with the Cyborg. Readers will get to see what really goes on there—and should expect a surprise. Muwhaha… 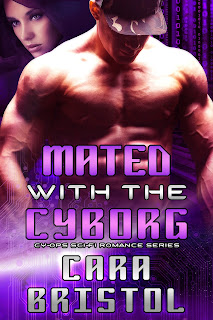 Mated with the Cyborg
by Cara Bristol
~~~~~~~~~~~~~
GENRE:  Sci-fi Romance
~~~~~~~~~~~~~
BLURB:
Kai Andros’s orders were simple. Get in. Gather the intel on the terrorist organization. Get out.
Then he met her. Mariska. Beautiful. Innocent. Ignorant of her father’s atrocities. And marked for death.
His orders said nothing about saving her. But he did. He went off-mission.
Can a rogue cyborg outrun both Cyber Operations and the terrorists to save the woman he loves?
~~~~~~~~~~~~~
Excerpt:
Mariska’s dress dragged along the metal floor as she headed for the general’s receiving room. People glanced at R981, but the android could have been alone for all the notice they paid her. Her veil seemed to render her invisible.
If only she could truly disappear. Years had passed since the last summons. Why had her father called her? Perspiration slickened her palms, and she had to concentrate to avoid wiping them and leaving a telltale stain on her clothing. The only thing worse than being afraid was showing it. At least her voluminous skirt hid her wobbling knees. Outside her father’s fortified headquarters, she halted and took a deep breath. I can do this. I can do this.
“You are nervous,” stated R981 in his stilted, but gravelly voice. No other android had vocals like his. His rumbling tone vibrated through her in a most disturbing way.
“No, I’m not,” she quickly refuted. Fear was a flaw. Flaws were punished. Although R981 was assigned to her, he had been programmed to report misbehavior and anomalies to her father.
The solid black orbs of his robotic eyes blinked once. “I detect pupil constriction, increased perspiration and respiration, which indicate fear.”
“I believe you are mistaken and require a full diagnostic. How long has it been since your last maintenance overhaul?”
“I am a new model entered into service five weeks ago. I do not require maintenance for another fifty-five point four days.”
She needed to shore up her courage, but R981 pulled open the door, making it clear he served her father. Just like the other droids.
Amazon US - http://www.amazon.com/gp/product/B01A62XIEG?*Version*=1&*entries*=0


Cara will be awarding a $25 Amazon or B/N GC to a randomly drawn winner via Rafflecopter during the tour.
a Rafflecopter giveaway